The suspense has been building. Are you ready to hear more of my trip to Thailand?

Last we talked, my sisters and I boarded a train from Bangkok to Chiang Mai. It was 7 PM and we were scheduled to arrive in the northern station the following morning around 9 AM. There are a couple of different options for this overnight train when booking your tickets, but we chose the #13 because the sun would be up while we were arriving. Our hope was that we would be able to glimpse the Chiang Mai countryside; Mountains, rice paddies, and lots of green foliage. Once on the train we found our seats and prepared to depart. In the meantime, there were people milling about, stowing their baggage, finding their seats and an older Thai woman selling chips for “cheap cheap”. 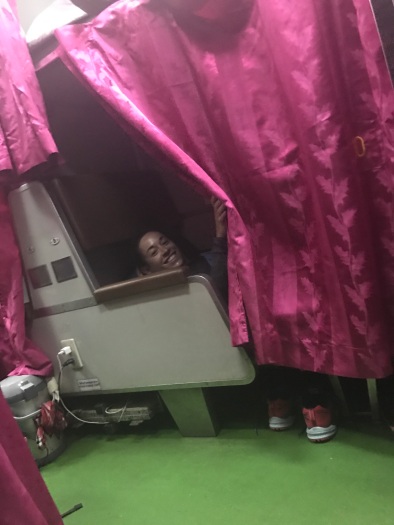 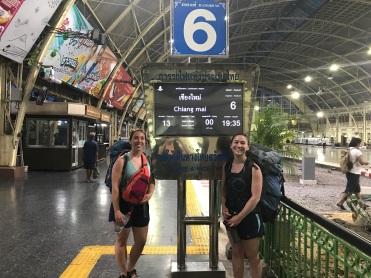 Shortly after sitting down Leah got up to use the restroom but returned thereafter and exclaimed, “I’ll think I’ll wait until we are out of the station”. Why? We wondered. Apparently, the “toilet” was a hole in the floor of the train seeing straight through to the ground. This was the first of many commodes we would encounter that had us saying, “Man, you have got to see the bathroom!”

As the train pulled out of the station, we chatted with the Canadian seated in our section and passed the phone back-and-forth as we played “Heads Up”. At bedtime the train staff appeared, efficiently transformed our seats into beds then disappeared again. We drew our individual curtains shut and closed our eyes to the gentle rocking of the train down the tracks.

The Thai people like to describe areas of their country by assigning it a temperature – hot, hotter, hottest; Chiang Mai rings in on this scale as hot. Upon our arrival the day was just beginning to warm up, a weight of humidity dripping from the clouds. Our ride, exactly on time, piled us into a van with other travelers and one-by-one dropped us at our respective accommodations. The AirBnb rental we booked wouldn’t allow us to check in until early afternoon, however, we were lucky to be able to drop our bags at the front lobby and head to the Old City to pass the time.

Chiang Mai City is the old capitol of the Lan Na Kingdom and the Old City is surrounded by a moat and wall to protect its citizens from enemies.

We reached this after a short 20 minute walk down a winding road. Once past the gates of the Old City one finds a network of streets in a grid-pattern that is approximately “one cigarette” in length. Meaning, to walk from one corner of the Old City to the next you should be able to smoke exactly one cigarette [This was never verified as none of us actually smoke cigarettes, but if you go to Thailand and smoke, let me know the verdict!]. Compared to the hustle and bustle of cars, buses and tuk tuks outside the gates, the Old City has an air of peacefulness and calm.

In Chiang Mai we did a lot of things. We got Thai body massages [AMAZING], drank more Thai Tea, went on an excursion to the highest point in Thailand at Doi Inthanon [Doi means mountain], visited an organic farm and learned the magic of cooking traditional Thai dishes, bathed and fed elephants, hiked to a waterfall, went swimming in said waterfall, took a yoga class and discovered a local park tucked into the corner of the Old City. We booked all of our day trips through local tourist agencies that are very easy to find. It’s overwhelming because of all the options, but we went with our guts, and most importantly made sure that the elephant sanctuaries did not allowing riding.

The Thai people love massage and it’s easy to see why once you’ve had one. For ~300 baht [or $6] you can get a one hour, full-body massage that incorporates deep tissue kneading and stretching. First you change into these outfits – for newbies, the pants tie in the front! All three of us put our pants on backwards and the massage ladies giggled as they told us to turn them around. Then they started with washing our feet and finished with your massaging our heads. We walked away feeling refreshed, declaring we would have one massage every day until the end of our trip.

Doi Inthanon is the highest mountain in Thailand and is where the late King Inthanon’s burial site is located. We drove ~1 hour in a bus climbing steeply up the mountain side to reach a pair of waterfalls, Wachriathan and Sirithan. Our tour guide loved our short hikes and explained how as it was durian season, we needed our exercise [Durian is a fruit loaded with sugar. It has a very stinky smell though and can be quite difficult to find in the local markets].

From there we continued our drive further up the mountain, reaching the highest point and the burial site. The further we climbed into the atmosphere the more chilly, windy, and misty the air around us became. A vibe that translated deep respect and importance for the site we were visiting. To the Thai people, the King is of great importance and must be respected at all times, even in memorial.

Next, we drove to the King and Queen’s pagodas surrounded by a botanical gardens. It was a lovely sight, and even lovelier as the clouds began to shift and a view of the valley opened up below.

Our final stop of the day was the Karen Hilltribe village where we played with the most adorable puppy and bought some seriously comfy Thai pants. 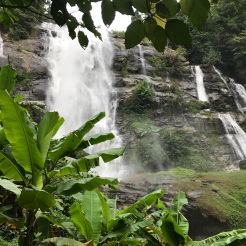 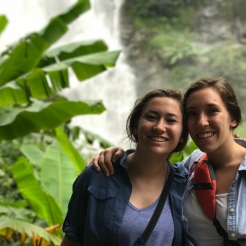 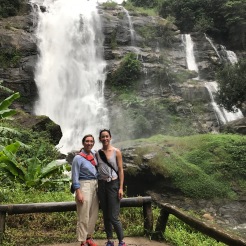 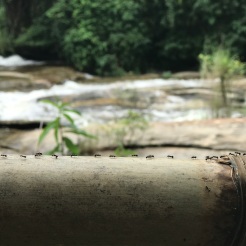 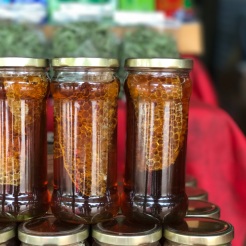 Another 1 hour bus ride and we arrived at the farm and cooking classroom. We signed up for an evening course and learned to cook traditional Thai dishes as the sun set over the Chiang Mai mountains. The farm was beautiful, growing everything we needed for our meal. We even got to walk around and pick some fresh herbs and flowers for plating. The Thai chili peppers are so small, so be careful when working with them. I accidentally ate an entire green pepper, thinking it was a green bean – it was SPICY. Anyone that wants to come over and enjoy a Thai dinner is welcome! 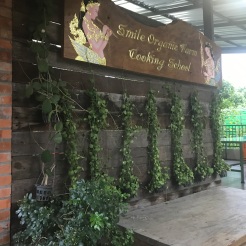 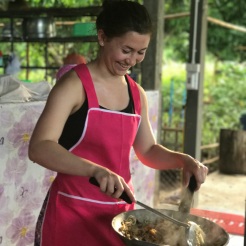 We were transported out of the city once again, this time to an elephant sanctuary. Elephants used to be employed and owned by families that would clear areas of the forest for farming use. However, the Thai government has outlawed the use of elephants for this type of labor. As a result there are many families that can no longer afford the care necessary to keep an elephant – they eat tremendous amounts of food each day! Hence, elephant sanctuaries. We went to a smaller location compared to some of the more popular retirement facilities, but it was still a great experience. We got to hand-feed bananas to the elephants and bathed them in a small pool on the property. Elephant’s mouths are like vacuums! They will use their trunks to grab banana after banana, and they will keep on eating unless the trainers limit their food.

Last, but not least, we spent a morning sleeping in, sweating it out in a yoga class, and laughing at the park.

Chiang Mai City was a full, bursting at the seams experience. 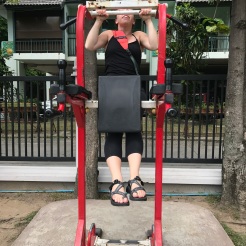 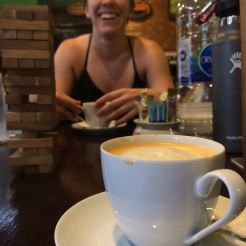 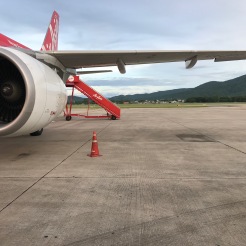 From hot we were now about to travel to hottest, the Andaman Sea.